The journey to recovery for Do and Sipaseuth, two children from Laos | Aviation Without Borders
Skip to main content
Escorting Sick Children 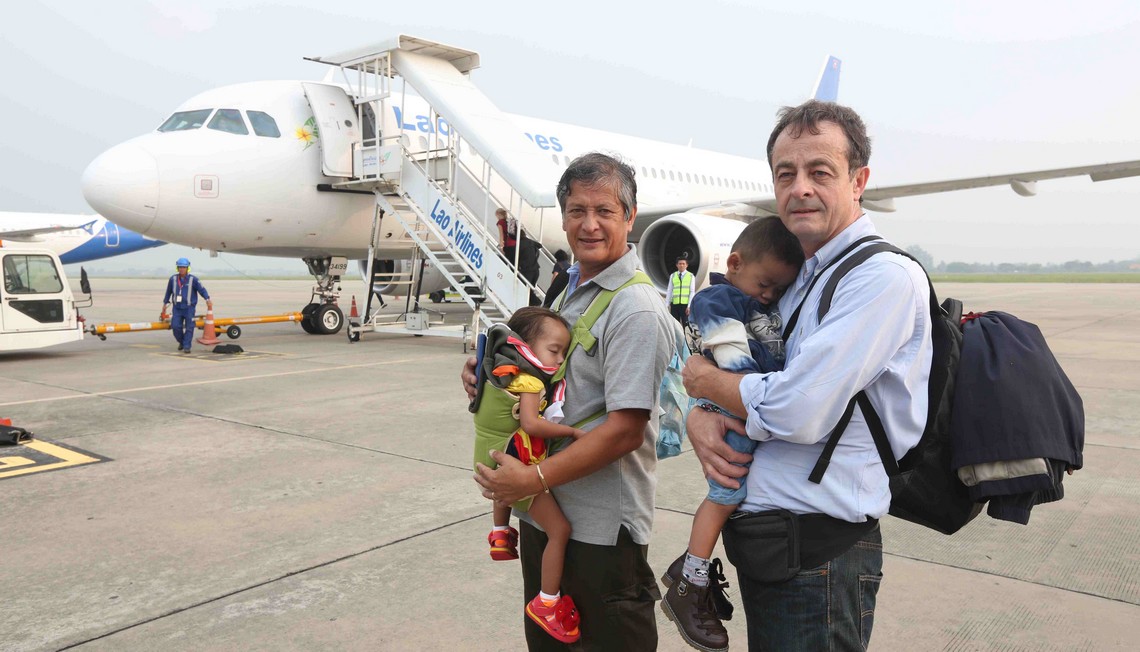 October 2014: Two ‘blue vests’- volunteer escorts for Aviation Without Borders- arrive in Vientiane to accompany Do and Sipaseuth to Paris. Both children were suffering from heart conditions and were taken into the care of the Patronage Heart Surgery association, our partner in Paris, to undergo operations which would go on to save their lives.

“When I arrived in Vientiane I joined Jean-Pierre, another escort already on-site. By chance, my arrival coincided with Ok Phansa, a festival symbolising the end of Buddhist lent, celebrated at the end of the rainy season.

The next day we were welcomed to the medical center by Doctor Alphonse Pluquailec, founder of Santé France-Laos, the country’s only cardiology centre. It was then that I met, for the first time, the two adorable children and their respective families.

Do, aged two and a half years old, had been diagnosed with Tetralogy of Fallot. The blue tone of her skin signalled the presence of a heart defect. Sipaseuth, a little boy of two years old, was suffering from the congenital heart abnormality ductus arteosis.

We got to know the children and tried to get them used to being around us. As soon as we approached them or tried to hold them, they would cling on to their parents and start crying. Despite all our efforts, they systematically refused to be in contact with us that day.

On the 11th October, we arrived very early at Vientiane airport. The two families were there and welcomed us with big smiles. There was a warm atmosphere and both Do and Sipaseuth were relaxed. Having slept on it, we felt reassured. After taking some photos with the families, we headed off to board the plane. Then arrived the moment of separation: traumatising for the children and so cruel for the parents. They knew that they were taking the risk of perhaps never seeing their children alive again.

The children struggled in our arms, shouting, crying and holding their little hands out towards their parents who were overcome with the sadness and pain of the separation.

After going through the police and customs procedures, we headed towards the departure lounge and the children gradually started to relax. Exhausted, they then feel asleep in our arms.

Once in Bangkok, we waited in the transfers lounge for almost two hours before our next flight. The parents had prepared bottles for the children, and clothes and nappies which we had to change several times during the long ten and a half hour journey to Paris.

Arriving in Charles de Gaulle airport, the host families were waiting for us. This meant another difficult separation for the children: Sipaseuth, having left his parents, seemed to have lost his bearings and remained attached to me as if I were the only link to his former life, before starting to cry.

A month and a half later, after the operation and a period of recuperation, Do and Sipaseuth were cured and Aviation Sans Frontières provided a return escort to take them back to Vientiane.”